In 2016, Zhang Yiming, a young Chinese businessman, owner of ByteDance, released a new app named Douyin for sharing music videos, a sort of hybrid of Instagram and karaoke. Initially, the app was intended only for the China market. However, the app gained popularity, and TikTok, a clone of Douyin, was later developed for the international audience.

In August 2018, TikTok purchased its main competitor, musical.ly. Then a wave of the new app advertisement swept the international users of YouTube and Twitter. So, the TikTok audience by the end of 2018 amounted to more than 800 million users in 150 countries. Bloomberg valued TikTok at USD 75 billion and called it the world's most expensive startup.

The TikTok and Douyin development strategy can only be compared with Snapchat. The core of the audience is teenagers, they are active, create a lot of viral content and launch challenges. To date, the popularity of Douyin and TikTok is growing faster than any social media in the world.

As of January 2020, the ranking of the most popular social medias looks as follows. 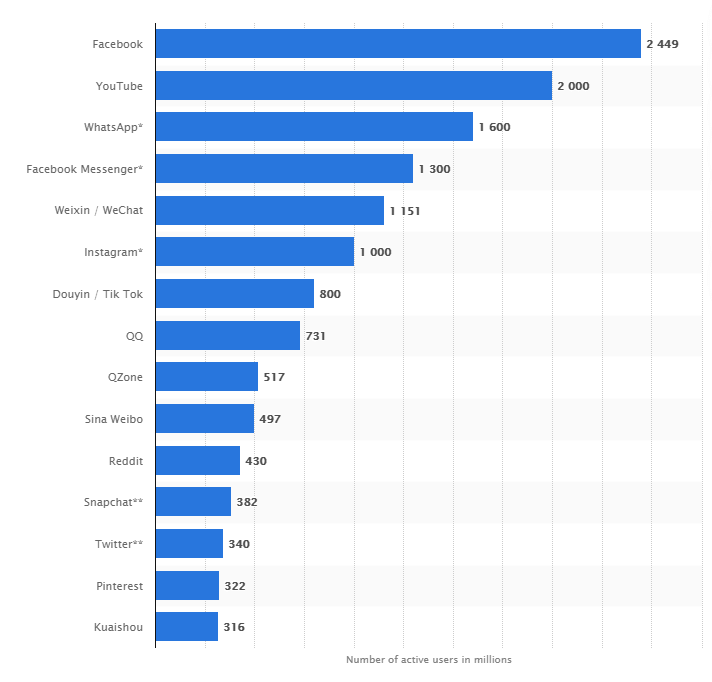 Douyin and TikTok now take the 7th position in the global social media ranking, although they began to gain popularity as recently as in 2016 – in contrast to the leaders that are present on the market for more than 10 years.

The social media has many haters and even more fans. The former do not appreciate an app with “trash” content. For the latter, TikTok and Douyin are an opportunity to take a break from the kilotons of political, social, and financial information flowing from everywhere and just relax watching fun content that has no meaning. Also, TikTok and Douyin attract users with their simplicity: the user does not need to choose or make decisions. Smart algorithms analyses likes, reposts, and video searches to decide what to show to a user, and the app's feed is always full of video.

Difference between TikTok and Douyin

TikTok and Douyin are two identical and at the same time different ByteDance apps. The only difference is geography. Users outside China cannot fully use the social network due to Chinese censorship. So the developers created an additional TikTok app popular outside China.

Users may download TikTok or Douyin depending on the mobile app store they use. TikTok is available on Google Play and AppStore, and Douyin on Chinese app stores. But the key difference between these two is not in (although is preconditioned by) geography: the two apps feature different content and completely different Internet celebrities. Bloggers popular in the Chinese web space have almost no followers outside China and vice versa, accounts popular in Europe, America, or the CIS countries do not have followers in China.

The audiences of the social networks are also different. In TikTok, they are mostly teenagers, while in Douyin, the age of users mainly ranges from 18 to 35 years. The Douyin audience is more solvent. The Chinese mentality is specific in the way that Internet celebrities are very influential and bloggers can literally “push” any idea and sell anything. Such people are called key opinion leaders (KOLs) in English, and in China they are called wanghongs (网红 wǎnghóng, 网络 红人 wǎngluò hóngrén – Internet celebrity).

Initially, the apps were free of any advertising, but in 2019 a French brand made a first attempt to advertise their product using short TikTok videos. Today, an increasing number of brands and companies are showing interest in promoting in Douyin and TikTok.

Irrespective to that advertisement option is preferable for your brand, it will be anyway necessary to carefully think it through and adjust to suit Douyin/TikTok format and trends. The apps have proven themselves to be creative and imagination platforms. Things popular yesterday can be completely forgotten tomorrow, and TikTok and Douyin audience’s preferences and trends are especially unstable. It’s essential to analyze your audience, create relevant and easy-to-understand content, and experiment a lot.

Why promoting in Douyin

Douyin is an app that almost every modern Chinese has. We have already said that the app enjoys the active and solvent audience. This is a must-have ad tool for brands that are going to promote in China. The artificial intelligence will aim your content at the relevant audience.

The marketing opportunities on Douyin are virtually endless; purchases can be made in a few clicks. Organic growth of views is the most conversion-capable and free-of-charge tool to advertise your product. The app's algorithms are designed so that even profiles without followers will have views thanks to the smart recommendations system. Marketing on Douyin/TikTok is especially relevant for companies whose products are aimed at the Generation Z.

Our team runs ad campaigns on Douyin and can help you with the launch of a new product by choosing the strategy most effective for your target audience. Contact us.